Come see what Vision Therapy can do for you!

What is Vision Therapy?

There are certain types of vision problems that are not correctable with contact lenses, glasses or surgery. Vision therapy is an individualized treatment program using specialized eye exercises and equipment that help teach the patient how to use their eyes correctly and helps them better understand what they see.

How does Vision Therapy Work?

Like many skills, visual skills are developed. Since they are developed, they can generally be improved through proper therapeutic techniques. In vision therapy, the optometrist prescribes visual tasks to be practiced under controlled conditions with the direction of a vision therapist. Repetition of these tasks enhances vision by coordinating and improving eye movement, focusing ability and helping proper eye-hand coordination develop as needed.

The first step to determining whether or not vision therapy is needed is to schedule a Developmental Vision Evaluation. There are many factors that the doctor takes into account prior to prescribing this course of treatment. In order to determine if you should schedule a Developmental Vision Evaluation, fill out the symptom checklist included in this brochure. 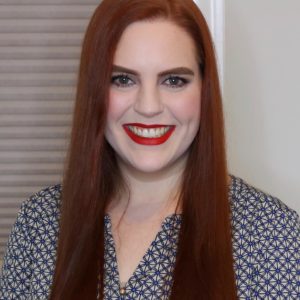 Dr. Jones obtained her Bachelor of Science degree in biology from Converse
College in Spartanburg, SC. She received her Doctorate of Optometry from
the Southern College of Optometry in Memphis, TN. She then completed a Residency
in Pediatrics and Vision Therapy at Bowersox Vision Center in Shelbyville, KY.

After this experience, she became passionate about helping children by identifying
and fixing these vision disorders earlier in life so they don’t have to struggle with
reading like she did.

She married her favorite optometry school classmate in 2017, and her husband
practices in Morrow, GA. She has an obsession with makeup, cats, and low-carb
recipes!

We are located in the Heritage Square Park, behind the Radiant Church, across the street from Piedmont Urgent Care on highway 20/81.